We all know what the C word is. ESPECIALLY the British. We take no small measure of joy in how profligate that word is over there. But since this is the #proper English speaking community of AMURICUH, today, C will stand for Candle. Or ceremony. Or cord. Yes, cord is a good one.

Witches love candles. In fact, sometimes, American witches with too much time on their hands will invade botanicas (or an Indio retail outlet that is TO DIE FOR) and turn their bedroom into the best aisle in the grocery store! (pictures below).  CAVEAT: This will oftentimes have the unfortunate side effect of causing a witch’s non-spiritual significant other who is otherwise adorable to audibly point out how many altars are already in the house as he begins to question whether the bedroom is a bedroom, or a 24/7 chapel of flickering candlelight that  to him for some ungodly reason is difficult to sleep through. A witch who is worth her salt will take this opportunity to practice the fourth part of the pyramid and keep silent about how he used to snore when he was unemployed and drinking all the time and THAT was hard to sleep through.

We digress; this is what we did to a corner of our bedroom. Ignore the obvious Catholic stuff at the top and check out the shelves. 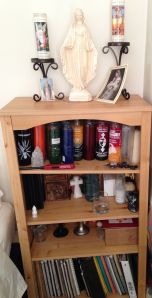 Candles! Our Minoan/Wica Trad friend Matthew would be so proud of us if he weren’t trapped under several feet of snow somewhere in Pennsylvania. It reminds us of his old apartment in Hollywood. Maybe we should paint the Madonna black.

Gardnerians love candles.  If we didn’t, we would be exiled from witchdom.  People debate about whether the quarter candles, which we can neither confirm nor deny had their stands broken by our high priestess, her friends’ kids or herself FOR A SECOND TIME, need to be yellow, red, blue, and green for East, South, West and North respectively, or if white should be used in each because it may or may not be more traditional. We tend to go with the most ancient of Wiccan adages and use whatever is handy.

For this lovely little tidbit, we highly recommend the wonderful business and amazing magickal forum of LuckyMojo.com.  While southern African American hoodoo is clearly not Wicca, who cares? They’ve got that shit perfected and we absolutely recommend most of the ways they work. So whether you anoint candles for increase from the ends to the center with your condition oil or from the bottom to the top (repeatedly), we remind you that this is a fertility religion; as long as it looks like you’re being the best kind of drunk bunk mate ever while you’re doing it, it should work.

It’s wonderful. The more, the merrier. For anything, really. Insist on it.

We can neither confirm nor deny that cords are used within witchcraft or with Gardnerian Wicca.  What we can do is refer you to books written by Gardnerians who also cannot confirm or deny that we use cords, to see how they instruct you on how to use them.

Uncle Bucky’s Big Blue Book of Rainy Day Wicca Fun lists cords in its index on 8 different pages. Being the thorough witches that we are, we’ll turn to whichever one comes up first (pg. 32 of 2nd edition) and break several Crescent Moon copyrights by quoting: “Most witches ‘do their thing’ in the evenings [LOL] and so illuminate with candles around the Circle and the altar.”  The important part is the sentence before it in which Buckland does a terrible job of neither confirming nor denying “Gardnerian has cords…”

One thing that may or may not be traditional would be using the cord to measure the radius of the circle, so that you can go for that precise, old school perfect circle straight out of the Greater Key of Solomon. Or you could just buy a rug that’s precisely the circular measurements you like, that also has a giant pentagram on it.  Does anyone know where we can order one from?

Cords also serve the very basic function of serving as a waist tie while wearing robes for the 10 seconds before ritual where you may or may not discard them altogether.

And that, dear readers, is our Gardnerian accounting of the letter C.  This pagan blog project really is fun, isn’t it? Now let’s get back to labeling all of those herb jars to prove that IKEA really is the Devil’s accomplice.

By the way, dear Wiccans, C is also for Cup.  It is *never* called a chalice.  Let’s leave that in the Church where it belongs.